Unexpected cavern encountered in France: the case history at WTC 2019The TBM was able to navigate out of kars cavity without significant downtime to the operation

Galerie des Janots is one of 14 projects being carried out to save water and protect resources by the Aix-Marseille-Provence metropolis, the water agency Rhône Mediterranean Corsica and the State Government. The Janots tunnel will replace old deteriorating pipelines located in a SNCF railway tunnel which currently contribute to an estimated water loss of 132 million gallons of potable water/year.

The completed tunnel will pass under Le Parc National des Calanques, with a cover between 15m and 180m and will increase water carrying capacity. The objective is to increase the water supply capacity from the current 330 liters per second, that is insufficient in the summer period, to 440 liters per second, as well as to provide easier access for maintenance compared to the old pipes currently running beneath the railway.

A rebuilt 3.5m diameter main beam TBM has encountered and successfully passed through an unexpected cavern during its drive on the Galerie des Janots water tunnel project in La Ciotat, France. The machine, launched in 2017, was 1 km into the drive when the cavern, studded with stalactites and stalagmites and measuring 8,000 m3 was discovered to the left of the planned route. 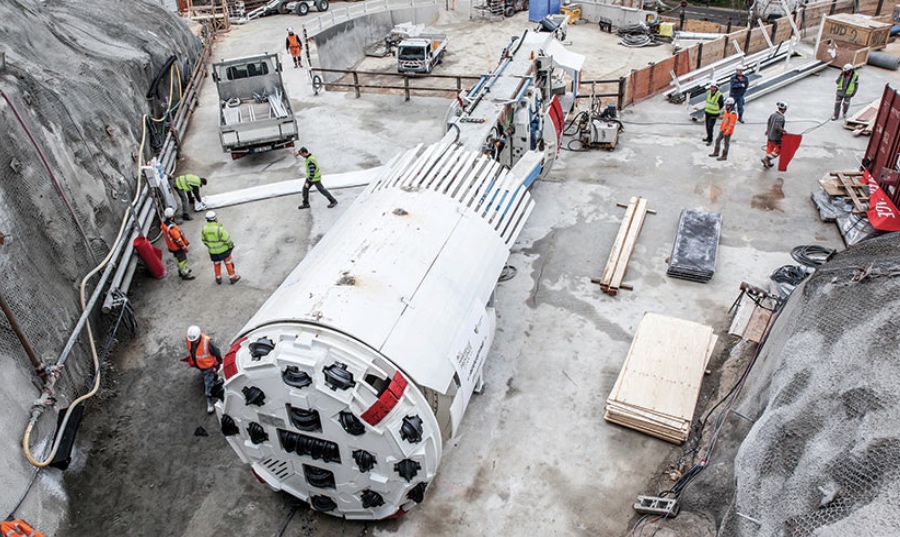 “We hit the corner of the cavern and had to erect 4m high wall for the grippers of the TBM to react against as it progressed across the void,” explained the Project Director of Galerie des Janots. A small door allowed the access into the cavity, that formed naturally at a point 60 m below the surface.

The TBM was able to successfully navigate out of the cavern in eight strokes and without significant downtime to the operation. Karst cavities were a known risk during the bore in fact, to cope with the risk, the TBM was equipped with a probe drill and equipment to backfill small karst features, but the cavern was not shown in vertical borehole reports conducted from the surface along the alignment.

The TBM has a further 1.8km to excavate before the 2.8km tunnel is completed. As it is possible to encounter further caverns, the machine is fitted with a geotechnical BEAM (Bore-tunneling Electrical Ahead Monitoring) system to predict ground conditions using focused electricity induced polarization.