Through the Carpathians mountains for 37.4 Webuild has won a contract worth more than euro 1 billion to lead a consortium to build Lot 3 of the Sibiu-Pitesti Highway in Romania


Lot 3 is the most complex part of the highway because it will cross the Carpathian Mountains between Cornetu and Tigveni for 37.4 kilometres, of which 12.5 kilometres will include bridges and viaducts, and a 1.7 kilometre long twin tunnel. The awarding of the contract followed an international bidding process involving construction companies from Austria, Italy, Romania, Spain and Turkey. Emphasis was placed on expertise in the design and construction of complex tunnels as well as a solid financial position on the part of the builder. The construction of the lot will create more than 40,000 jobs.

Commissioned by Compagnia Nationala de Administrare a Infrastructurii Rutiere (CNAIR) on behalf of the Romania’s transport and infrastructure ministry, the work will be done by a consortium led by Webuild with a 90% stake. Local partner Tancrad will have 10%. The contract will be 85% financed by European Union funds and the remaining 15% by state funds.
Webuild is already working on Lot 5 of the Sibiu-Pitesti Highway, located 10 kilometres from Lot 3. Once the five sections under construction are completed, the Sibiu-Pitesti will be more than 122 kilometres long, connecting central and western Romania to Europe’s highway network as part of the Rhine-Danube Corridor of the Trans-European Transport Network (TEN-T).

In addition to the tunnel, bridges and viaducts, Lot 3 includes the design and construction of more than 23 kilometres of a double-lane highway, two interchanges (Valeni and Coetu), 18 kilometres of consolidation works, the construction of a maintenance and control cernntre, and work to preserve the environment.

There will also be an animal crossing at Olt River. It will help reduce traffic congestion between Cornetu and Tigveni by proving an alternative route to national roads.
Webuild brings to the project a track record of more than 2,400 kilometres of tunnels and the construction of 80,300 kilometres roads and highways across the globe. It is working on other projects for the TEN-T.
In Italy, it is developing 400 kilometres of railway on 16 strategic projects such as the Terzo Valico dei Giovi-Genoa Juncture, and high-speed/high-capacity rail lines between Naples and Bari. 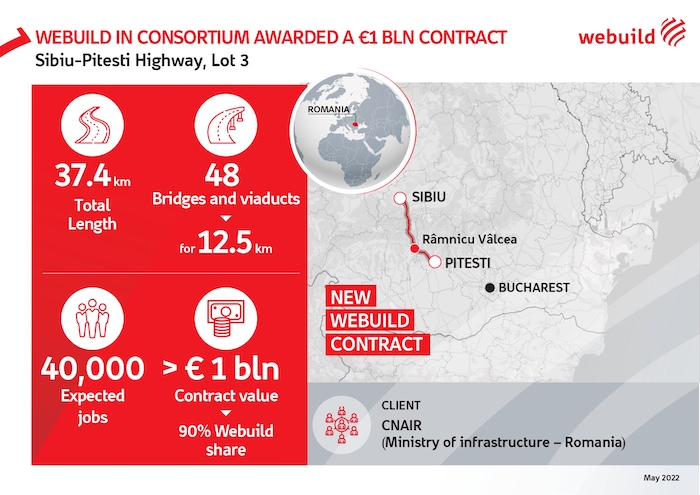