Graphene: successful first road surface trial results in ItalyImprovement of service life at over 250 per cent thanks to the super modifier Gipave containing G+


Directa Plus, a producer and supplier of graphene-based products for use in consumer and industrial markets, and Iterchimica, an Italian based world leader in products that enhance asphalt performance, announced the first official results from the trial re-surfacing of a section of an Italian road with the G+ upgraded asphalt super modifier containing Directa Plus G+ graphene. The trial was the first commercial test of an asphalt concrete with this innovative graphene-enhanced super modifier (Gipave) and involved the refurbishment of the two upper layers of a 1km-long section of an Italian road.

It was carried out by Iterchimica with support from an independent laboratory. The performance of the road surface has been constantly monitored since last November. The trial, comparing asphalt concrete with the super modifier to a traditional asphalt surfacing, was successful in all respects:

• Service life-fatigue resistance improvement was measured at over 250 per cent;

• Resistance to the passage of vehicles-mechanical tests showed an Indirect Tensile Strength increase of 35 per cent;

• Resistance to deformation at the same load- Stiffness Modulus was measured at different temperatures, showing an improvement of 46 per cent at 40°C;

As a result of the successful trial, Directa Plus and Iterchimica are now starting discussions to replicate the trial in new locations in Italy and in other territories including the UK, the US and Oman. 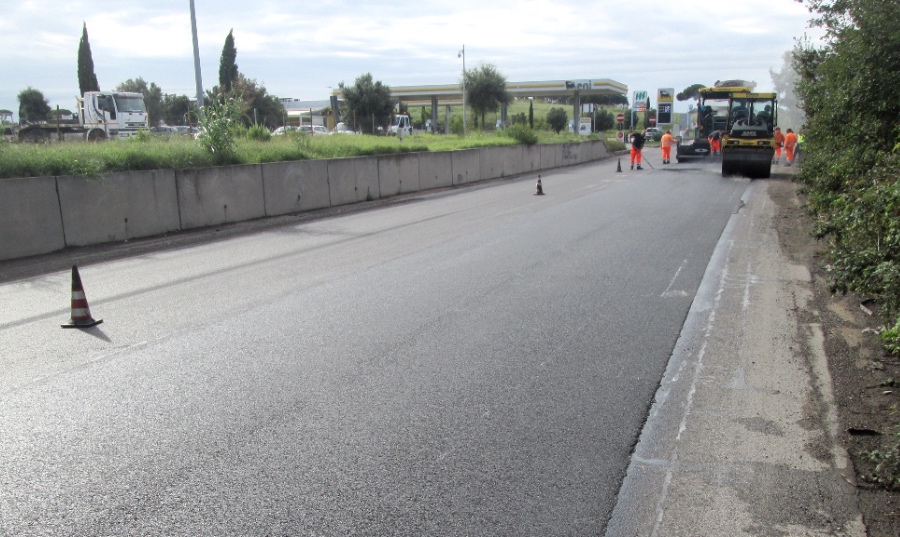 The graphene-enhanced super modifier is the result of a three-year research program called “Ecopave Project” with a patent filed in 2017. New technologies such as the super modifier and the rejuvenation of old paving will help to meet Italy’s Green and Circular Economy standards. Once laid, asphalt concrete with super modifier can be 100 per cent recycled, which can reduce the extraction of new materials from quarries and first-use bitumen.

Federica Giannattasio, CEO of Iterchimica, said: “Road tests were made with the purpose of validating the excellent results obtained in the laboratory - at least + 250% resistance to fatigue - and represent a further step towards the goals that we have set: recycled and 100% recyclable roads that are produced at low temperatures, long-lasting, without potholes and environmentally friendly. After the first results of the trial section that took place in Rome we are ready to trial this new technology in the United States of America, in Oman and in the United Kingdom where we expect to obtain similar results.”

Giulio Cesareo, Founder and CEO of Directa Plus, added: “This trial has proven that the G+ upgraded asphalt supermodifier, is suitable for high-traffic roads, highways, airports, and ports. The product perfectly matches Directa Plus’s and Iterchimica’s vision by offering an innovative, environmentally friendly and sustainable solution to the challenge of reducing the carbon footprint of road surfacing and resurfacing.”