Milan Linate Airport has been up and running again since 26th October this year after exactly three months of work. The Milanese airport closed on 27th July so that work could be carried out on the 2.4km long, 60m wide runway used for landing and take-off and on the taxiing lanes. The runway and lanes were completely resurfaced down to a depth of 60cm and the existing concrete buffer-ends were rebuilt. This type of work, which involved using the most innovative Mapei product systems including those for sealing joints, can only be carried out in the summer because, when work is carried out on runways, the weather needs to be stable and calm and a hot climate is required to get the best results.

Mapei engineers were on site during both the design phase and the execution phase and were involved mainly in repairing the existing seals in the slabs of concrete in the parking areas used by the planes and in the areas where they join the new take-off and landing runways. The first step was to thoroughly clean the old surfaces, a total length of 25,000m, using both hand tools and grinders in order to remove the hardened, solidified bituminous mass that had lost all its elastic properties from inside the joints. 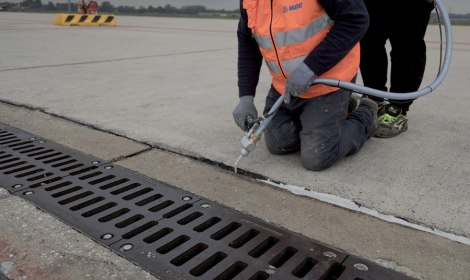 The joints that still had traces of bitumen along the edges were then treated with Primer SN, two-component, fillerized epoxy primer and adhesion promoter. The old joints that had clean edges with no traces of bitumen, on the other hand, were treated with Primer M, one-component, solvent-free primer for polyurethane sealants for compact, absorbent surfaces. Before applying the new sealant, to ensure the correct size and depth of the joints and prevent it sticking to the bottom of the joints, Mapefoam closed-cell, compressible, polyethylene foam cord was placed along the bottom of the joints.

It was only at this point that the new sealant was applied in the joints by hand and using Mapeflex SPP electric guns. The sealant chosen was Mapeflex PU50 SL fluid, polyurethane sealant which has been specifically formulated for sealing structural expansion and distribution joints in industrial concrete floors, including those subject to intense traffic such as runways and parking bays in airports.

It has a fluid consistency so that it may be applied quickly and, thanks to its quick-hardening properties (around 2 mm every 24 hours), joints may be put into service very quickly, resulting in various economic benefits.