The Silverstone racetrack in Northamptonshire, England, has been a cornerstone of British motor racing for many years, having first hosted the British Grand Prix in 1948 and holding the title as its sole home since 1987. It was also the venue for the very first British motorcycle Grand Prix in 1977 and has retained the annual race for almost a decade. Such a venerable history has earned the circuit high praise among some of the industry’s most influential names.

After Silverstone recently secured the British Grand Prix for a further five years, five-time world champion Lewis Hamilton called Silverstone “the ultimate race circuit”, saying that if Formula 1 were to ever lose Silverstone, “it would lose a lot of its essence”. 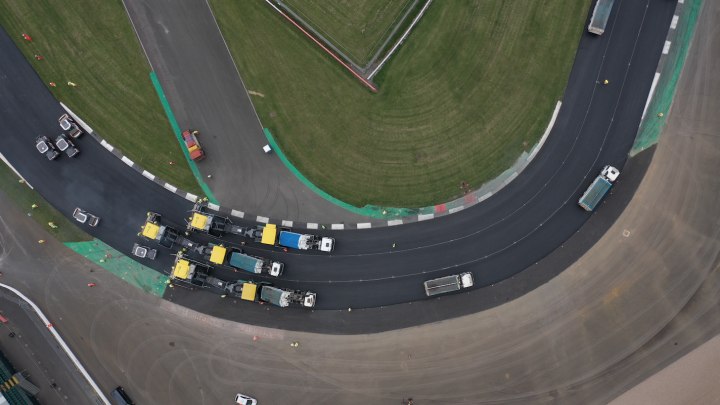 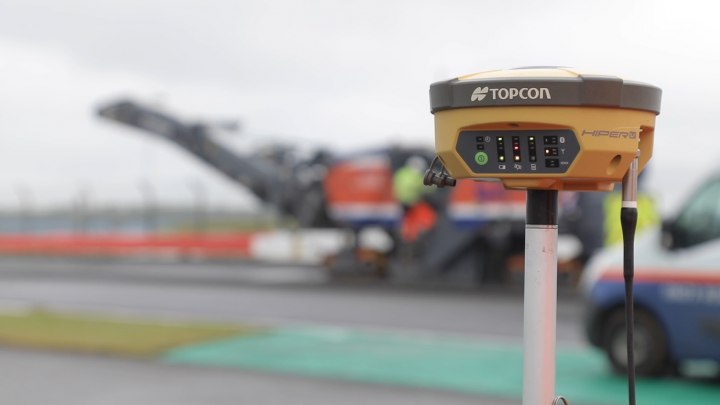 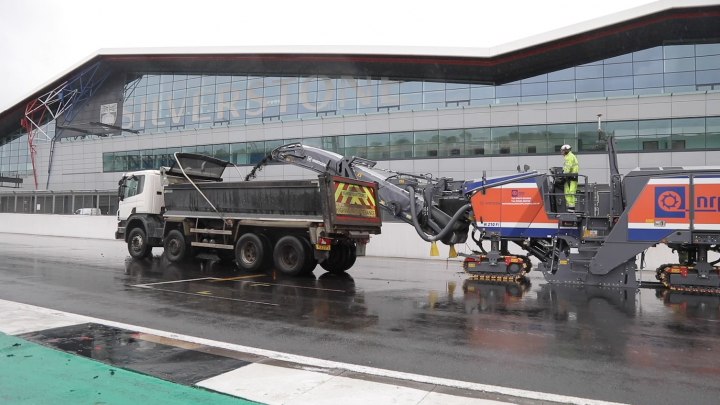 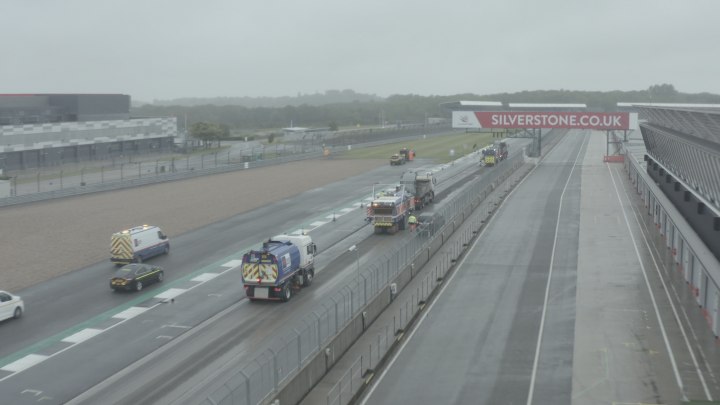 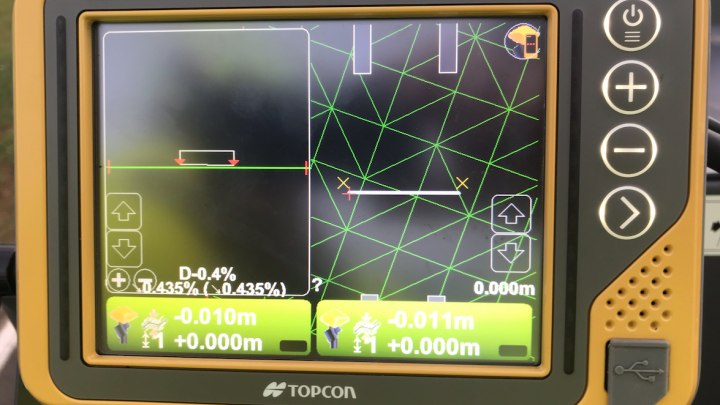 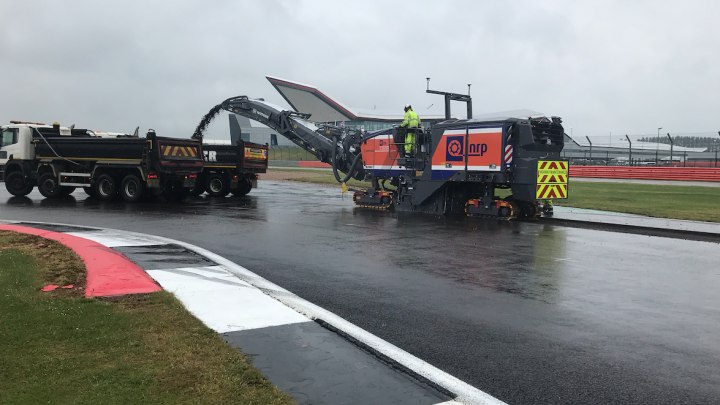 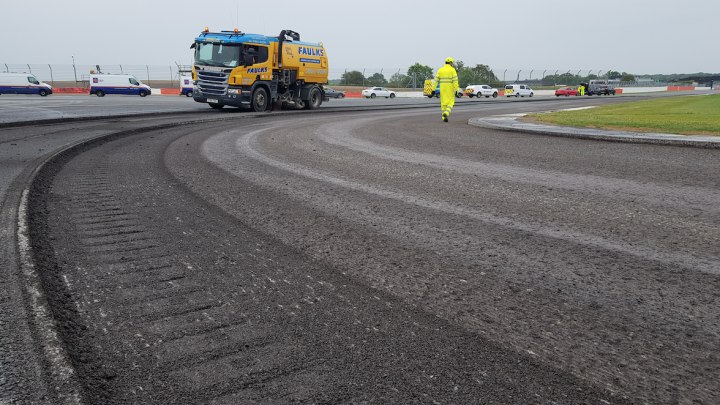 A first-class circuit deserves a first-class surface, and in the lead-up to the hotly anticipated 2019 Grand Prix and MotoGP races, it was time for Silverstone to be resurfaced for the smoothest ride possible. There needed to be no bumps whatsoever and no opportunity for standing water, which can lead to dangerous aquaplaning. However, with only a couple of weeks to completely replace the track’s surface, it was clear that if the team were to get past the finish line on time, they would need to use the very latest paving technology.

An expert team led by lead contractor Tarmac and Italian racetrack specialist Dromo was appointed to deliver the complex resurfacing project. Tarmac’s industry-leading road planing business, NRP, took the lead on the milling project, working with Topcon Positioning Group for its advanced SmoothRide machine control technology and to ensure that there would be, quite literally, no bumps along the road. Not only that, but the team needed to alter the entire camber of the 5,500m-long circuit to optimise water run-off. While the SmoothRide 3D analysis hadn’t previously been used on a racetrack, Tarmac, NRP and Dromo recognised the potential of the precision technology which had proven itself on highways and airport runways.

It was to be the first use of the technology in the UK. Discussing the nature of racetracks, Sjoerd Stoové, 3D paving specialist at Topcon Positioning Group, said: “Racetracks are completely different from other roads - it’s very specialist work. This is mainly because on a normal road there are separate lanes, but on a racetrack the ideal racking line changes constantly from left to right. With Silverstone, there also needed to be two ‘crowns’ in the road, which were not always in the same spot, and there were very tight corners requiring quick camber changes over short distances”. However, the team were up for the challenge and set about bringing the new track to life. Rather than simply replacing the top layer, the track required a complete redesign. Stoové explained: “If you only take off the top layer and replace it, you are essentially just replicating the existing situation. We needed to create an entirely new surface not only to eradicate any risk of bumps, but also so we could shape a new camber that would make sure all water runs off to avoid aquaplaning”.

The project team first carried out a scan of the existing surface to precisely identify where any bumps were and where standing water might be likely. This scan data was then converted into a 3D digital terrain model (DTM) using Topcon’s Magnet Collage software, with the model being used to inform the new design. It was decided that milling machines would be used to shape the new track as they can make the surface extremely level, meaning the subsequent paving can be done in a constant layer thickness. This has advantages not just for the placing, rolling and compacting of the material, but also for the actual lifespan of the surface.

Sjoerd Stoové added: “The difference between the existing surface and the new design resulted in an average milling depth of 70mm over the whole racetrack. However, the problem with averages is that in some places you need to mill more, where in others you need to mill far less, or even not at all. Traditionally, a surveyor would need to spend days on the track to stake out all the milling depths and the crew on the machine then need to manually make sure those numbers are adhered to”.

This was all avoided with Topcon’s RD-MC Machine Control system. Firstly, Magnet Office and 3D Office were used to create the files needed for machine control from the design. The system was then able to use GNSS positioning to accurately calculate the difference between the existing surface and the new design at any given position, and therefore determine the desired milling depths. Sensors on the machines - in this case, two Wirtgen W210Fi machines - were used to pinpoint the current depth of the milling drum on both sides then, based on the desired depth and the actual depth, the machines were told to move the drum up or down. Stoové said: “This way, the new design is executed to millimetre accuracy, leaving the surface both extremely smooth and a perfect cross section”.

Milling of the 87,000sqm track took just three days and two nights, and left a seamless, smooth subbase that reflected the 3D design perfectly, achieving a level of quality that would be virtually impossible using traditional methods. There was also no need for surveyors to paint depth numbers on the asphalt or create stringlines to mill to, saving days of survey work. And, because the milled surface was so accurate, Tarmac was able to precisely calculate the amount of material required when it came to paving using its state-of-the-art BPO Asphalt management system.

Paul Fleetham, managing director of Tarmac’s Construction business, said: “Our approach to delivering this prestigious project blended the expertise of our teams with the latest innovations in digital construction technology. We wanted to ensure the new surface gives drivers the confidence to immediately attack the circuit’s iconic high-speed corners from their very first laps. Utilising cutting-edge precision systems like SmoothRide in partnership with Topcon helped us to achieve this goal”.

Over the finish line

Unsurprisingly, it took a huge amount of preparation, dedication and collaboration to achieve a flawless finish on one of the most famous racetracks in the world. Working with Tarmac, NRP and Dromo to process the design data and create the required files for the machine control, including formulating a new workflow for milling, Topcon’s professional services team was able to integrate cutting-edge technology to maximum effect - all of which resulted in one of the smoothest milled surfaces ever to be seen on a racetrack. Stuart Pringle, managing director of Silverstone Circuits Ltd, said: “Silverstone has always been a world class circuit, but thanks to the efforts of Topcon and Tarmac, the newly laid surface is truly world beating. I don’t believe there is a smoother finish on any race track anywhere in the world and that is thanks to the ground breaking technology Topcon brought to the project”.